Isn't She From Krypton, Too?

I've been thinking about the narrative structure of Infinite Crisis, and have gotten hung up on Power Girl's role in the sprawling saga.

The first four issues of JSA: Classified placed her at the heart of the gathering storm. In Infinite Crisis #2 she recovered her memories, confirmed that she was a survivor of Krypton-Two, and learned that she had lived as the adopted daughter of the Golden Age Superman and Lois Lane.

She's then courted by Kal-L and Superboy Prime, who want her help in their scheme to restore Earth-Two. Sensibly, Power Girl decided not to lend her support to that genocidal idea, and pretty soon after she voiced her "no" decision, got sucker-punched by Superboy Prime and spent several issues in a comatose state while attached to Alex Luthor's tuning fork machine. (She's released by Wonder Girl, Superboy, and Nightwing in issue #6.)

What's ironic is that in providing Power Girl with a viable origin and restoring her memories of her life with her loving adoptive parents, the writer also severely limited the ways the character could develop and be treated in the later stages of the story. By being cast as "the lost daughter" in the series' underlying family drama, Power Girl became someone of special interest to Kal-L, with the older hero treating her as any (long-lost) father would his child. If he did anything other than intercede to shield her from harm, readers would find his actions to be horribly out of character. Subsequently, (and understandably), Kal-L intercedes in almost every fight in which Power Girl is involved. 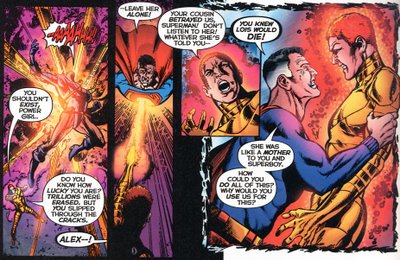 And at the climax of the storyline, Kal-L and Superman arrive at a strategy for dealing with Superboy Prime without consulting her. When Power Girl realizes that the other Kryptonians haven't included her in their plan to take down the crazed villain, it takes the Martian Manhunter to keep her from joining the two Supermen when they speed off. 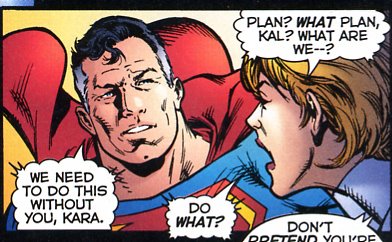 When I read issue #7, I totally bought Kal-L's line. But at the same time, I couldn't help but think that the version of Power Girl that I first encountered in 1977 would never have allowed those two men to fly off and deal with a grave threat to the universe without her. J'onn J'onzz might have been able to hold that Power Girl back, but, given the circumstances, I've got to believe that he would have had a real fight on his hands.

Geoff Johns is, of course, entitled to embed Power Girl within an Earth-Two family story if he wishes. It's also his prerogative to craft the conclusion of Infinite Crisis so that it might serve as a pivotal defining moment for the two Supermen.

However, I must admit that I can't help wondering what the end of the story might have looked like if Kal-L had seen Power Girl as more of a comrade-in-arms, rather than as someone he needed to protect from harm. Who knows, had she been one of a trio that propelled the villain through Krypton's red sun, perhaps she might have prevented Superboy Prime from beating Kal-L to death on the surface of planet Mogo.

Comments:
I think Kal-L was in character. He's a product of his generation. No matter how capable he knows his cousin is, she's still family and a woman and his job is to protect her. Plus, he knew there was a chance someone could die and he would prefer it be him than Kara, especially since he no longer had Lois. I can't imagine that playing out differently. Sure, Kara could've put up more of a fight, but probably would still have been stopped, so why use up precious panels? And if she went after them, it's a complication the story didn't need at that point.

I think a lot of characters could've been used more or better, but it was a big cast and only 7 issues. With those limitations, it played out well, I thought, with room for that nice epilogue.

Yeah, given the story structure, Kal-L's actions are indeed in character. And Johns is also telling us (I think and hope) that Power Girl can attain some measure of "comic book gravitas" now that she has re-claimed her Earth-Two past and experienced the traumatic loss of her recently-discovered parents.

Perhaps the next Crisis, sparked by Superboy Prime's inevitable escape, will be resolved by PG performing some awe-inspiring (solo) act which contributes mightily to saving the universe.